“Things do not change, we change.” (Henry David Thoreau)

Have you ever been in a situation where your opinion or idea differed from somebody else?

Has it ever been in a situation where you and the other side needed to get something done, even when you obviously disagreed on how to get it done?

Then you have been in a situation where compromise was a necessity.

Compromise as defined by the Bing dictionary is:

1. Agreement: a settlement of a dispute in which two or more sides agree to accept less than they originally wanted

2. Something accepted rather than wanted: something that somebody accepts because what was wanted is unattainable

I am sure than in some day’s previous so called compromise came at the end of a weapon or other legal matter because one side or the other would not accept not getting what they originally wanted.  That was not a compromise but maybe a ruse to get someone to get their own way, in other words a selfish type of society.  Is that where we are today?

Life, society as we know it has arrived at this point in time because somebody, somewhere eventually compromised ideas, situations, commitments or ideals for the better of life or society.

Not too long ago I responded to an old friend by returning to his company to work.  Promising me an opportunity to do things I was not able to get done last time we worked together, I jumped at the offer.  Unfortunately above the two of us was a new, young management person who only understood – “his way or the highway”.  Needless to say that combined with some ailing health issues my return to a position I enjoyed did not last long, because compromise was never going to be an issue or happen.

For success, compromise is a necessity in business as much as any other place

If you have a strong marriage, I would believe that your marriage has at times been in situations of compromise.  Did you love your spouse any less after the compromise?  Probably not.

So why is compromise seem like a such a dirty word these days, especially in Washington, DC where hundreds of individuals are supposedly working on the ways to keep our country free and prosperous.

Recently former Senator Robert Dole was interviewed in the Wichita Eagle and the article relayed some of Dole’s philosophy about compromise.  The writer stated that Dole got things done because “he did it by doing what doesn’t get done anymore: He worked with Democrats. He persuaded opponents to serve their country instead of their parties.” 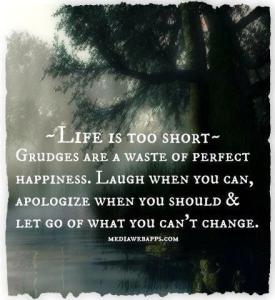 Within these blog postings you will find my thoughts & feelings about traveling life with the constant companion of a ‘CHRONIC ILLNESS and/or a DISABILITY’.

This is my journey, my battles with my own chronic illnesses of COPD, Severe Asthma & Heart issues.

You will find my lessons learned, my hopes for the future and the journey I travel.

The good, the bad & the ugly of my life, my battles!